the most awesome thing i've done in spite of diabetes is ...

everything! in the past ten and a half years, i...

learned to drive a stick shift . went to college . went to movies . babysat . joined a sorority . lived on my own . went to seaworld . had sinus infections . did my own laundry . colored my hair . ate pasta . worked freshman orientation at college for two years . joined a sorority . became an aunt (nephew) . went to countless dances . become a godmother . went to st. louis . learned how to use an insulin pump . ate candy . went to college parties . went to nashville . went to florida . went shopping . have been in weddings . became an aunt again (niece) . played intramural softball .  hugged . took pictures . played intramural soccer . graduated from college . went to parties of all kinds . had strep throat . gave myself insulin shots . celebrated new years . went in the st. louis arch . worked in restaurants . got a job (and another, and another) where i use my degree . went to the zoo . played flag football . went to washington dc . went dancing . went out for breakfast . counted carbs . went to the beach . got my own insurance . saw my mom win an olympic medal . was a nanny . held a monkey . rode on a motorcycle . changed endocrinologists . celebrated valentine's day . lost friends . went to weddings . won JDRF fundraising awards . bought a condo . wore green on st. patrick's day . checked my blood sugar . was strawberry shortcake . was tony the tiger . was becker bear . was spongebob . was clifford the big red dog . kissed . lost grandparents . went to las vegas  . paid my own medical bills . ate cake . grew my hair out . went to baby showers . went to the kentucky derby . played in the snow . enjoyed thanksgiving . made new friends . went to baseball games . went to concerts . was in the hospital for a weekend . went to mexico . played in the snow . went to an NFL game . went shopping on black friday . went out to dinner . got laid off .  celebrated friends birthdays  . traveled by plane . had the flu . went to the smithsonian museum . played in the sun . raised money and walked in the JDRF walk . got a new job . cut my hair . dressed up for halloween . went to the holocaust museum . went swimming . shared snacks with friends . went to maker's mark and dipped my own bottle . celebrated 4th of july . fractured my leg . decorated easter eggs . hosted parties . went to churchill downs . made rainbow cupcakes (and ate them) . met my favorite man . celebrated christmas . drank diet coke . changed endocrinologists again . turned 18. 19. 20. 21. 22. 23. 24. 25. 26. 27. 28. . went to hubers . went fishing . went sledding . went out to lunch . hit golf balls . went to a football clinic at UofL with coach strong . celebrated family birthdays . celebrated 10 (so far) diabetes-versaries

this is just a portion of the many things i've done in the past ten years. not all the things were happy, not all the things were sad. diabetes doesn't care if you are having a good or bad day emotionally. you live your life. diabetes is just a part of it. this list will continue to grow and expand as i live. "diabetes doesn't control my life. i control my diabetes." 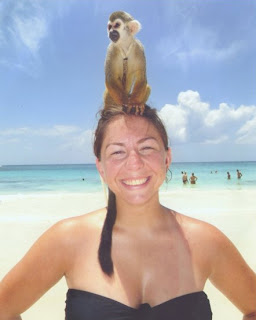 see, told ya i held a monkey. and he sat on my head.

This post is my February entry in the DSMA Blog Carnival. If you’d like to participate too, you can get all of the information at http://diabetessocmed.com/2011/introducing-the-dsma-blog-carnival/
Posted by meredith at 8:23 AM