summer is upon us, and for many people that means it's time for a vacation! to get everyone ready for this vacation season, i have some awesome guest posts about traveling to share with you from some of the amazing members of the DOC. today's post is written by martin from diabetically speaking! thanks so much martin :)

Traveling with diabetes is always fun. Getting groped at the airport, scanned from head to toe, explaining to the security personnel that my insulin pump is not a cell phone, then having them use the little sniffer wand on it to make sure it's not full of...well, I'm not really sure what they think it might be full of.

The real fun happens before the trip though. There is a lot of stuff that has to be packed when you go somewhere with diabetes. If you're real thorough (of which I'm not), you'll remember all of the various components that add up to optimum diabetes management.

A few months ago I made a trip to Washington D.C. for a few days, which also happened to coincide with my birthday. The day before my birthday, I had a day's worth of insulin left in my pump, as well as a day left before I needed a site change, so I decided I would wait until the morning of my birthday to refill and put in a new site so I could start my day with a free shower. (A "free shower" is when those of us with various devices attached to us get the opportunity to shower without said devices and attachments.)

Free shower accomplished, I had a lox and cream cheese bagel for breakfast that my girlfriend had surprised me with via room service, and then went about the process or inserting a new infusion set and refilling the insulin reservoir for my pump.

Where are my insulin reservoirs?

I searched through all of diabetes supplies, dumped everything out onto the bed, rifled through my suitcase throwing clothes to the side that weren't yielding hidden insulin reservoirs, but they were nowhere to be found. That is because they were sitting back at home on the table where I had left them when I was packing.

After a string of profanities and inappropriate gestures toward my diabetes supplies, I did the carb math for what I had eaten, and after dosing to cover that, I had just barely enough insulin to last six more hours if I didn't eat anything else. All of my plans to go explore DC and get lost in the city were tossed aside. I had a new mission: Track down insulin reservoirs.

I chose to approach the problem from multiple angles. First, I called my Medtronic rep from back home and got her on the hunt for someone in the DC area who might have a reservoir. Second, I reached out to the DOC, and fished for someone in the area who might also have extra supplies. Third, as a final resort, I called my endo and left a message at his office letting him know that I may need him to call in a prescription to a local pharmacy for Lantus (slow acting insulin) and a box of syringes.

After several back and forth phone calls and a bevy of frantic Tweets, I managed to secure a reservoir from both a local Medtronic rep. I had to walk a couple miles to meet the Medtronic rep, and I felt like a total sidewalk pharmacy customer when he called me and said, “Meet me by the carousel. I’ll be in a white SUV.” 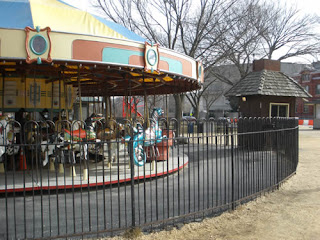 The reservoirs he brought me were small, but at least I wouldn’t have to be without my pump, even if I did have to refill it daily. Fortunately, the DOC also came through and I got an adult sized reservoir later that evening, just in time to get a Crumbs cupcake with friends for my birthday.

The moral of the story is simple: When packing for a trip, make a list of the diabetes supplies you absolutely must have and check off each item as it goes into your suitcase or bag. Also make sure you have your emergency phone numbers. And remember, when in doubt, tweet it out. The DOC is full of amazing people, and odds are good that somebody knows someone, somewhere, who can help.
Posted by meredith at 8:06 AM